I titled this post Big Boys because that seems the theme around here lately! Simeon's version is Baboos, very cute to hear him say. Although we have started some big boy transitions we are definitely not pushing him to grow up to fast, I'm certainly not quite ready to relinquish my baby. 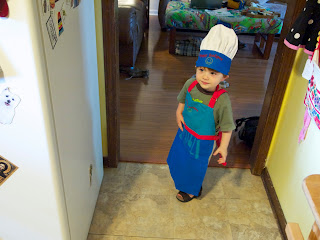 My little chef! I bought this for him on a whim and he LOVES it! Who would have thought a not yet 2 yr old boy would love to dress up. He mainly loves the apron. There is a matching mitt that is also very cute. 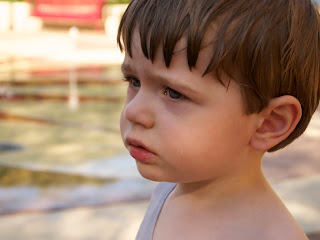 Beginning of our Fourth of July weekend, who could resist such a face? At the fancy shopping center close to us playing in the fountain. It is so close to us, but this is our first visit this year. 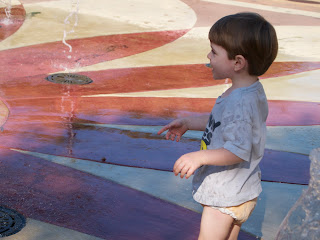 Ok naptime seems over, so trying to keep this brief. In the above picture Simeon is wearing his Little Beetle Learners, which I have been buying here and there to try to find a good price. After a few washes they are absorbant enough to hold a small pee accident and being Simeon is not going #2 on the potty yet they snap down the side for clean up of those messes. He showed some interest in pottying a few weeks ago and he actually peed without prompting too much a few times. So we decided to go for it.
He seems young to me and it's going to be a process. I guess he has always wanted to be mobile and do just what we do, so... Praise and treats really seem to help. I do have to tell him most times it's time to potty. And though this may seem pushy it seems preferable to me to the battles over diaper changes. The child has always hated them. He is so proud of his Baboos, and I think they are adorable. At home that is all he wears most of the time because he wants his shirt off to potty and putting it back on every time is not happening. Plus it is so hot here and we don't run the air at 70 degrees.
We had a few setbacks when we traveled to Memphis for our church conference, then he was sick last week. He was scary sick, like running fever greater than 103 for 3 days. Ughhh, no fun at all for anyone. He looks like he's lost weight too, he was totally uninterested in food for an entire week. Mostly all he wanted was to nurse. And although I'm mostly a quiet promoter of breastfeeding especially a toddler mostly because in our culture many see it as weird (honestly I thought it was strange too before I had a baby). But this was definitely a benefit, he was too sick for anything else and if not for nursing he may have dehydrated. It ended up being viral and we just had to treat the symptoms.
Another big boy change was adding the full size bed to his tiny room. I planned on transitioning him to the bed from the crib, but he wants no part of it. It's ok there's not a big rush. I did really enjoy having the bed in his room when he was sick, there was no way I was going to leave him alone when his fever was so high.
Posted by Elizabeth at 12:37 PM 2 comments: