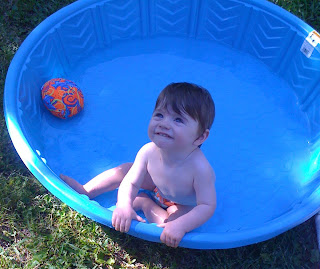 Long time no blog. We have been doing well for the most part at the Root household. We've been traveling some, visiting friends and family. We had a great time in Franklin, TN with the Algoods. Daniel's grandfather is not doing well in Arcadia, LA. He is an amazing man who is unfortunately had a difficult time battling Parkinson's. Here is an amazing article about him, second from the top. Simeon Paul is named for him.

Simeon had another ear infections, and he is following this up with more teeth coming in. But for the most part he is pretty happy. He will play independently for short periods of time, although Mommy is his favorite toy. He is playing with some of the natural wooden toys that I bought him and he hasn't been too interested in until now, I was beginning to regret spending top dollar on things he could care less about. I'll have to get a picture if I can catch one. He is in constant motion. He really wants to be held a lot so I have started wearing him on my back in my Baby Beco. This has been the most comfortable baby wearing I have done yet. Up until now it has been bearable but not my choice for getting things done around the house. But I don't mind wearing him on my back. I can get things done and he is happy.

He is sleeping better, and I am feeling more like a person again. I'm trying to do better about planing out our meals, thanks Holly you are truly inspiring. It worked pretty well this week. Prolonged sleep deprivation has been a difficult thing for me, trying to get anything done while feeling like I was in a fog was tough. I'm sure we'll have some more difficult times, but I'm grateful for more sleep and having energy to get some things done. 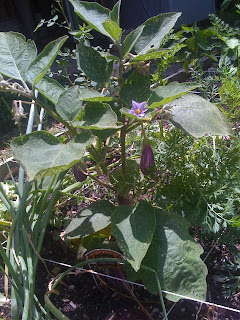 Onto the garden, ahhh frustration.

First off the newly purchased composter is not holding up well, it isn't completely broken yet... $100 bucks down the drain. It is really my fault for making a spur of the moment purchase at Lowe's and not hunting down the a better quality (probably costlier) product.

Then there have been successes with the garden:
-We have harvested about 4 yellow crookneck squashes.
-One of our tomatoes is doing good and I have 4 tomatoes
-My one eggplant is doing well
-Our hot peppers are doing great, and the sweet peppers are slowly producing peppers 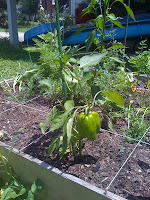 We have had garden failures.
-In trying to help the squash plants cascade out of the raised bed (they were hogging multiple squares) I must have killed one of the two plants:(
-Several of my tomatoes have blossom end rot, I think I had that problem last year. It's kind of late but I'm trying to add calcium back to the soil by adding crushed egg shells around the plants.
-One tomato plant is mostly dead
-Several tomatoes seem to be dropping as many blooms as are maturing into fruit, I'm not sure of the cause.
-My neighbor's yard man cut off the blooming tops of my pepper plants with his weed eater:( 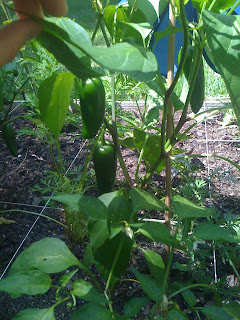 Umm just found out the beco can be back worn as soon as baby is hold his/her head very well (4 mos), I really wish I had known this sooner!