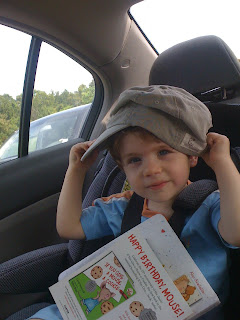 For some reason this fall has been kind of special among fall seasons for me, I've always been more of a spring person. Perhaps it's having such of a high energy child who wants and needs to be outside. Looking forward to going outside at least once a day in the blazing heat just isn't as fun. So we have been LOVING the cooler temperatures!

Thanks to Daniel we replanted our garden. I kinda skipped the summer posts about it because it was kind of a failure. We planted too late again and didn't mulch well. The weather was weird, but other people I know had far better gardens than us:( Oh well here's to the fall garden. We planted some plants from seed: "weird" greens- broccoli raab, lettuce (our only true successful endeavor), and carrots. Then we set out a few tomatoes and swiss chard from the nursery and half of them died after a weekend of rain from the tropical storm. I'll try to post pictures later. I'm trying to stay upbeat really so I won't go into the compost issues...

And it seems we are changing in other ways too around here: our baby is getting to be such of a little boy. Before he turned two he went through a phase of eating less and nursing more which was odd to me, but this book warned me it would happen. A few weeks and we are definitely past that phase. There were also signs that changes were happening, he has started independent play and you momma's with babies that have been entertained with staring with their own hands for hours might not see the significance of this. But my boy really hasn't been that into many of his toys which I carefully selected at all until a few months ago. We received a play table that is in our living room and it is a great place to put his hand-me-down train, legos, blocks, colors, etc. and keep the clutter on the floor to a minimum for me:)

He is less interested in the comforts that momma can provide and really craving more social interaction, he asked for his good friend all the time and wants her right beside him. He says her name and points beside him. It is so sweet. And if there is a group of kids he wants to go stand in the middle of them, his verbal skills aren't quite up to conversing and he mostly likes to observe. He is talking more and more, but only Daniel and I can understand him much of the time. It's kind of a sweet phase in my opinion:) He is more and more ok with going on a Daddy outing without as much concern of where Momma is. Interestingly enough he is more snuggly than ever, briefly but he is into hugging and kissing us. We love it! He's always been too busy to snuggle much.

Personally I have gone through a stressful patch of Daniel working a lot, trying really hard to do it all here and kinda burning out. When I was unable to sleep one night two thoughts came to me: "Acquire a peaceful spirit, and around you thousands will be saved." St. Seraphim of Sarov. I love this quote and when I reflected on my life I haven't done a good job of acquiring peace in my life. And in my former life of listening to many podcasts on Ancient faith radio I remembered a priest's wife saying that in a very busy and stressful time of her life a nun told her that if you are feeling overwhelmed with the load that has been given to you pray that your capacity to handle it will be granted to you. It was to me an answer to my prayers. So I have restarted two podcasts via ancient faith radio: one scripture readings prescribed for the day and the other one a saint or two of the day. They are short, but with a very busy two year old sometimes it takes a while to have 7 minutes where I can really listen ! I think this has greatly blessed my life. I still struggle with trying to balance everything but I'm trying to put first things first. I hope everyone else is enjoying the beginning of Fall.
Posted by Elizabeth at 5:51 PM

Fall and Spring vie for first place in my opinion. I love them both! But even more so now that I have kids. It's so nice to be able to comfortably head outdoors. It's hard when your husband is away a lot. Give yourself plenty of grace!