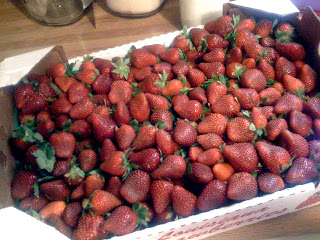 So Daniel had a post about LA strawberries being in season now. And we have been enjoying them. I decided I wanted to make some jam and process it. There was a post last summer about us making salsa, and it was really a learning experience. We didn't have all the equipment we needed and we didn't know what we were doing. After a few mistakes, and after talking to some people with experience I feel like I might actually be able to preserve some things I could give to people. Daniel and I ate what I canned last year, but I didn't feel quite confident giving any salsa or jam away. 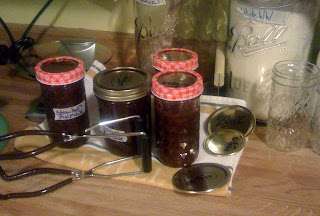 So I got this cookbook last summer, Putting It Up With Honey: A Natural Foods Canning and Preserving Cookbook by Susan Geiskopf. I used it to make some fig honey jam that we have enjoyed all winter. That was a money saving endeavor, because some friends gave us huge bags of figs (free food!) But I will say the strawberry marmalade did cost me. The recipe called for one pineapple, 4 oranges, and 6 cups (sliced) strawberries. At least I had enough jars and lids I didn't have to buy those. Oh yeah the great thing about this book is all the recipes have honey instead of processed sugar, but honey is more expensive. For canning purposes I try to find the cheapest honey I can b/c it is going to be cooked so long whether it is raw or not doesn't matter. I still would like to think that gourmet marmalade would have cost more and not had the unique and healthier qualities of my honey marmalade. It is always amazing to me that you start out with a large amount of fruit and end up with so few jars of jam. You might can tell from the fuzzy picture I ended up with 3.75 jars! I processed the full 3 and the partial Daniel and I are eating on now. I used bigger jars than the recipe called for.

I will say making my own marmalade, jam, etc. is such of a fulfilling activity. I guess similar to making our own bread. Yeah you can find it cheaper in the store, but it won't taste as good or be prepared with as much love.
Posted by Elizabeth at 7:03 PM